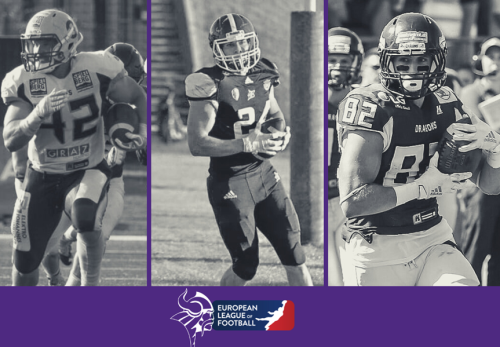 Blake Nelson: „I chose the Vikings because I wanted to be a part of a winning culture and alongside my brothers bring an ELF championship to the city of Vienna. I am really excited to play in the ELF which is the highest level of competition in Europe and bring more recognition to the talent that is in this league. I expect nothing less than an ELF championship and I know that we have the talent to make it happen. My personal goal is to lead the league in sacks and help my team to a championship. I cant wait to help Vienna in every phase of the game, offense, defense and special teams and have some fun winning games!“

Kende Rathonyi: „I am grateful for the Vienna Vikings Franchise that they gave me an opportunity to prove myself in the strongest league of Europe. My goal for 2022 is to work as hard as I just can to help my team to win the ELF. Also, as the first Hungarian player of the league, as far as I know yet, it is such an honor to represent my country in the ELF, too.“

Felix Reisacher: „Being from Vienna, I’m extremely excited to be part of the Vienna franchise in the ELF. The team is absolutely stacked with local and international talent. I can’t wait to see what we can do on the big stage. I’ve followed the league from the very beginning. I think the ELF is a huge step in growing American Football in Europe and it gives local players an opportunity to compete at a professional level. It’s now time to put Vienna on the map as the football capital of Europe. No matter where I play, the goal is always the same: win the championship. I will do anything I can to help my team accomplish that goal.“

„Blake Nelson is one of the most versatile playmakers that I have seen in Europe. He is a guy that is all over the field and has a motor that doesn’t stop. Having a player that can play all three position groups on defense is an advantage that many don’t have. Whether it is rushing the passer, chasing down plays sideline to sideline, or dropping into coverage he will be able to do a lot of things for out defense. Did I mention he is a punt and kick returner! When it comes to Kende Rathonyi, I see so much potential and an incredible work ethic. He has been outstanding in lower leagues and I cant wait to witness him develop on the big stage and work with our RB1 Flo Wegan. Last but not least: We are very excited to have Felix Reisacher joining our franchise in the ELF. His versatility as a receiver, being able to play inside and outside, will make him a playmaker for us this season. Having seen his work ethic in the off season there is no doubt that he is doing everything he can to make himself the best football player he can be. Felix is dedicated to show what the Austrian home grown talent can accomplish in the European league of Football. He is an overall awesome addition to the Vienna Vikings.“